Why do we want students to know about tables and graphs?
Tables and graphs can be useful tools for helping people make decisions. However, they only provide part of a story. Inferences often have to be made from the data shown. As well as being able to identify clearly what the graph or table is telling us, it is important to identify what parts of the story are missing. This can help the reader decide what other information they need, or whether the argument should be rejected because the supporting evidence is suspect. Students need to know how to critique the data and the way it is presented. A table or graph can misrepresent information by

It is easy, if students are not skilful at reading graphs and tables, to interpret them incorrectly. They can make wrong decisions because they are basing them on false inferences. When constructing graphs and tables, it is also possible to misrepresent the data. Research suggests that students often regard tables and graphs as an end in themselves. Few refer to them as a source of evidence, or as a way of exploring patterns and relationships in data or information.

The curriculum
Tables and graphs are relevant to almost all areas of the curriculum. The conventions of tables and graphs are consistent across all curricula. It is the context in which they are used that identifies them as science, social sciences, geography, etc. The table below gives examples of English, mathematics, and science ARB resources that include tables or graphs.

Examples from the Assessment Resource Banks

What are the problem areas for students?
The National Education Monitoring Project (NEMP) identified two relevant sets of skills

Trials of ARB resources have identified further areas of difficulty for students.

Language
Some technical vocabulary can cause problems for some students.

Some students are only familiar with the everyday meaning of table. These students draw a kitchen table when asked to "draw a table". Go to Language barriers.

Tables
In our ARB trials we have found that most students can complete simple table-reading tasks. Students have had difficulty with:

Variables – what are they?
In graphs and tables the components that are being compared or measured are called variables. For example, if the question is: How does shadow length vary during a day? The length of the shadow is one variable, and the time of day is the other. It is often useful to describe variables as either dependent or independent. The dependent variables are what can be seen to be changing in relation to the particular levels of the independent variables. In the above example

In many instances, however, there is no obvious connection of this type between the variables. In other situations we are interested in how the many variables interact with each other. There are 4 main types of variables:

An investigation can have any combination of variables. This is defined by the question. Variables which are subject to some sort of random, statistical errors are known as random variables. Most variables in real investigations are of this type (and are usually just referred to as variables).

For investigations with no numerical data it is usually better to use a table to present the data. A table with numerous variables can be broken down into smaller tables that look at each variable separately. The interaction between the various variables can then be explored.

What a table can tell you

Structure
Any graph used to report findings should show

It is good practice (but only a convention) to put the dependent variable on the horizontal (x) axis and the independent on the vertical (y) axis. 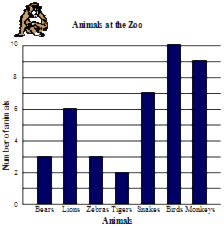 Line graphs
Line graphs should be used for continuous variables. 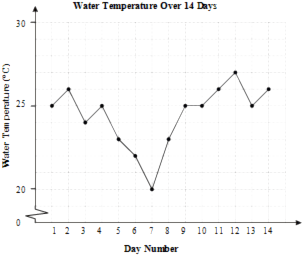 Pie graphs
Pie graphs (sometimes called pie or circle charts) are used to show the parts that make up a whole. They can be useful for comparing the size of relative parts. Because it is difficult to compare different circle graphs, and often hard to compare the angles of different sectors of the pie, it is sometimes better to choose other sorts of graphs.

What a graph can tell you
On a graph you get an overall shape of a variable or the relationships between variables. A line graph represents a numerical or mathematical relationship and so has more information "buried" in it than other graphs. Line graphs can sometimes be used to make predictions for values that were not measured, by interpolating or extrapolating the trend, or by looking at the shape.

A study of 12 and 14 year olds found that individual students noticed the patterns of line graphs in different ways. Their responses were grouped into five categories.

Teachers need to consider the age of their students and reword at an appropriate level.

Possible progressions in teaching about graphs
Progressions in constructing and interpreting graphs should be used with caution. Students' skill levels are likely to be influenced by

The following chart does, though, provide some useful guidelines.